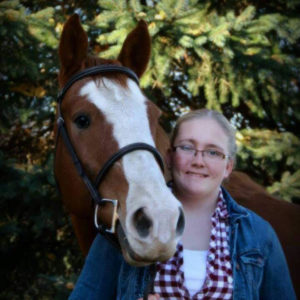 The sun shines bright, the water is bustling and the noises of summertime critters echo off in the distance. Shouts of cheer come from boys as they reel in a catch while they are fishing at camp courageous. But two still remain quiet and patient as they wait for their catch. HopeWell intern Becca Galloway’s arms are wrapped around little Tyler as they hold the fishing pole together. Ensuring he felt loved, cared for and safe.

Becca was nothing short of fulfilled through her time at HopeWell Ranch. Beginning as an intern in February of 2018, her eagerness shined through as she came to multiple volunteer orientations and was humbled to work at a place like HopeWell. Her personal definition of hope motivated her to help others.

“Hope is God’s way of telling you that your story still has pages left. He will see it through that your story is read cover to cover. No matter how hard turning a page may be, he will allow you to turn it,” said Becca.

Surrounded by horses at a young age, Becca describes herself as a horse fanatic, calling them her life and livelihood. At the ranch, Becca trained the wranglers and taught those who wanted more experience with horses, how to be safe with them. Not only did her love for horses’ overflow, but also her love for people. Although she had struggles herself, she continued to encourage and uplift all of those around her.

Becca had a series of surgeries as she grew up to aid her health problems, but she did not let this stop her from reaching her goals. Upon graduation from Grand Valley State University, she planned to work at a therapeutic equine riding center and eventually wanted to own and manage her own. HopeWell Ranch was a stepping stone for Becca to learn the skills she needed to keep pushing forward with her dream.

Becca had a strong work ethic and enjoyed her time with the horses and people who came to the ranch. Her heart was to serve in any way possible. To help people heal, teach people about horses and lead her to fulfilling her lifelong goals. Sadly Becca’s health began to deteriorate. With tears in her voice, she called HopeWell Ranch Executive Director Jodi Stuber to share she needed to go home. Becca texted Jodi the following day to share that she was not pleased with what the doctors had found, but looked forward to spending time with her family over the weekend.

Remaining in touch over the following week, Becca seemed joyous to spend the time she did with her family. Her health continued to decline quickly and she lost her battle on June 27, 2018. The family at HopeWell Ranch was crushed by the heartbreaking news. Becca was dearly loved by the ranch and was a true part of the family at HopeWell.

“Her lifelong dream was to do what we are doing and we were honored that her last three months she got to live out some of her God given goals,” said Jodi.

Contributions in memory of Becca Galloway were made to HopeWell Ranch as a way for Becca’s dream to live on. Three things that were very near to Becca’s heart were education, horses and programs. HopeWell Ranch has now created the Becca Galloway Memorial Fund, which has already sent a HopeWell staff member to receive EAGALA (Equine Assisted Growth and Learning Association) certification.

Plans are underway to create a 5K race in Becca’s honor entitled the Becca Galloway Memorial Run. Funds raised through this run will continue to provide for the three areas of interest that Becca believed in. The heart of HopeWell Ranch is to see Becca’s loving spirit live on at the ranch and beyond.

Thank you very much for helping us keep Becca’s memory and legacy alive. Becca Galloway will be remembered as a woman of faith who never gave up and a giver of hope. We thank God for allowing Becca to spend the summer with us and are greatly encouraged by the legacy of love and hope she left at HopeWell Ranch.